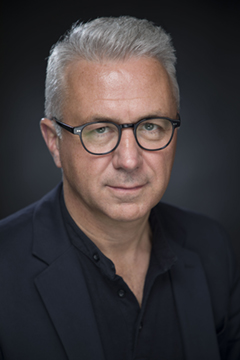 Born in Glasgow in 1961, Calum Colvin has exhibited his work nationally and internationally for over thirty years since graduating from the Royal College of Art, London in 1985. He was a winner of one of the first Scottish Arts Council Creative Scotland Awards from which he created the acclaimed exhibition for the SNPG ‘Ossian, Fragments of Ancient Poetry’ in 2001. He was awarded an OBE the same year and is Professor of Fine Art Photography at Duncan of Jordanstone College of Art and Design, University of Dundee.

Colvin’s constructed photographic artworks begin as large-scale studio 'stage-sets', tableaux of everyday objects, furniture and bric-a-brac carefully posed and theatrically lit. Viewed from the fixed-point perspective of a large-format camera, painted trompe-l'oeil elements are introduced, integrating object and subject in a complex mise en scene. These are finally photographed on film, digitized and printed onto paper or canvas. These visual illusions/allegories are intended to draw the viewer into a creative dialogue as the images are interpreted, touching on contemporary concerns relating to society, the environment and aspects of national identity.

His works have been widely exhibited in venues as diverse as Orkney, Los Angeles and Ecuador, and are represented in numerous collections including the Metropolitan Museum of Modern Art, New York; The Museum of Fine Art, Houston; The Tate Gallery, London and the Scottish National Gallery of Modern Art in Edinburgh.

1979-1983: Diploma in Sculpture, Duncan of Jordanstone College of Art, Dundee.

Digital Art and Activism Network (joint with University of Abertay)

Museography: An invited 'intervention' of artworks within the Collection at The McManus Galleries Dundee

Museography: An invited 'intervention' of artworks within the Collection at The McManus Galleries Dundee

The Jacobite art that faces up to the past. The Scotsman 30/11/15. The Scottish National Portrait Gallery has now invited Calum Colvin to contribute a commentary to its Jacobite collection. Artists’ “responses” to historical works are generally lamentable. Not so with Colvin. He works by creating assemblages and then photographing them to make a single image and in his Ossian series, exhibited at the SNPG some years ago, he provided a subtle analysis of Scottish identity and the myths from which it is constructed: voices of the past, distorted as Chinese whispers as they echo faintly down the generations. So the Jacobites are the perfect subject for his art of allusion. Packing past and present in a single image, it illuminates both. Read more at: http://www.scotsman.com/lifestyle/culture/art/the-jacobite-art-that-faces-up-to-the-past-1-3962244